Micro Simulation Player is the function to run various type of simulation animation which is depicted as 3D models' movement. It is capable to record and play a traffic flow as a result of UC-win/Road and other traffic simulation.

Micro Simulation Player is the function to run various type of simulation animation which is depicted as 3D models' movement.
It is capable to record and play a traffic flow as a result of UC-win/Road and other traffic simulation. 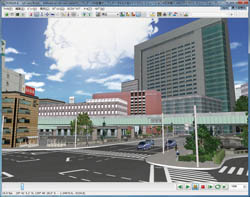 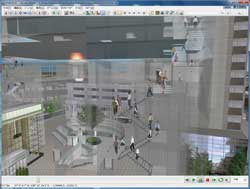 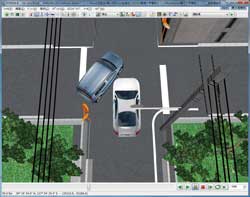 The movement and status of all 3D models in a scene are defined in the XML format for saving animation data. 3D meshes of the models are not stored this file, but a link to the associated 3D model is. Additionally, it's possible to set weather, time and other visual effects.

The "Model Instance" contains "Type" information and is associated with the model's profile. Moreover, the instance contains a list of states defined by time, so that the location, direction, animation and display status can be set for each state. There are two types of "Model Instance" (temporary instance" and "scene instance"). Temporary instances can be generated in real time whilst running a simulation, however, they can't be saved in the UC-win/Road project. The 3D model profile selected at the time of generation is used. When a profile hasn't been assigned, an instance will not be generated. A scene instance can be generated at the same time as a temporary instance, however it will be saved with the project. This instance can be assigned for a model instance that exists in the current UC-win/Road project as a part of the scenery. A traffic light is an example of a "Scene Instance". During simulation, instances generated by UC-win/Road are controlled by XML data.

A playlist can be created to play more than one XML file at the same time. The playlist has a time offset for each item and can be used simultaneously for multiple datasets. Moving objects are created in place and move based on a linear interpolation of location coordinates. During simulation, traffic flow is set to on. In addition, long distance simulations over short time periods and high-speed playback of low-speed movements are also available.

A number of time units are supported. Notably, support is planned for absolute time including date and time.

There are two major functions.

Snap placement of instances to existing roads, footpaths and terrain

In some cases, the simulation program doesn't use elevation or a road alignment is different to the one in the VR space in UC-win/Road, so the snap function places the simulation results in the specified position in UC-win/Road. When searching for the optimal road or snap location, the following parameters are considered.

When reproducing a micro simulation, the traffic in UC-win/Road can be initialized in any state.

This displays a 2D preview of the XML file. In this window, set the area for the scene you want to display, assign scene instances to UC-win/Road objects and so on.

The playlist editor is effective even when multiple simulations are being performed simultaneously. The time span of the simulation is displayed on a Gantt chart. It's possible to drag & drop as well as input time offsets for simulations.

A tool bar to control animation is displayed at the bottom of the screen.

Set the parameters for the traffic snap method.

Paying 40% of the product price allows anyone to use the product on any PC anywhere in the world.


* We are sequentially making a transition from the maintenance-support service to [Subscription Service] from April 1, 2016 in order to enhance support for diverse product usage and to reduce license management cost.

■Rental floating license : After web activation, anyone can use the products on any PC anywhere in the world.

■Rental access : You can increase the number of licenses you own and use these additional licenses for a specific period of time (1 month to 3 month) at your discretion. We will later send you an invoice based on your usage log. The advance application is 15% off of the regular rental license price. Please place an order from User information page.

*Rental / Floating Licenses were introduced on September 2007 to enhance user experience and convenience of our products.

*Duration of Rental / Floating Licenses cannot be changed after starting these services. Re-application is required to extend the rental and floating license duration.

Contact us from Sales inquiry or email to ist@forum8.co.jp 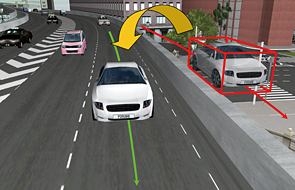 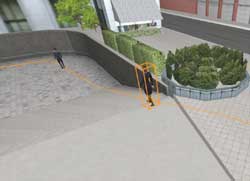 ■ Analysis of traffic accident Virtualizes based on the accident record 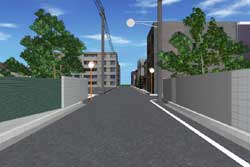 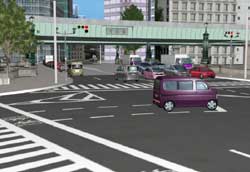 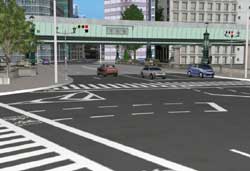 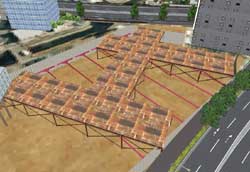 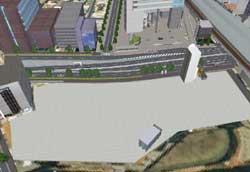 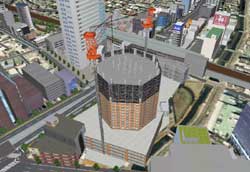 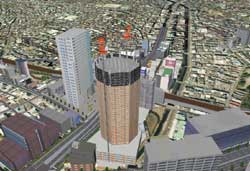 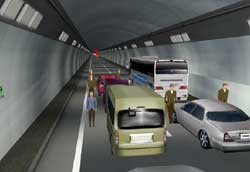